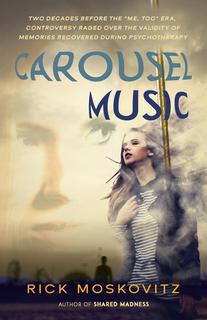 Carousel Music is a compelling novel about the subjectivity of memories and the importance of listening when abuse victims speak.

Carousel Music is a "She said, he said" mystery, set two decades before the "Me, too" era during a time when controversy raged over the validity of memories recovered during psychotherapy. As knotty as the dilemma of when to believe women who claim that they were violated as adults, what if the victim was a child and the perpetrator was her father? And what if she had no recollection of the trauma before undergoing psychotherapy as an adult and her father was so certain that he never did it that he sued the doctor in order to clear his name?

Stephanie Whittington lands in the care of Dr. Kenneth Miller with few childhood memories and little sense of who she is. In the course of her treatment, the pictures from her childhood gradually fill in to create a personal narrative that forms the foundation for a growing sense of identity. But what if parts of that narrative turn out not to be true?

At stake is Stephanie's recovery, her father's reputation, and the doctor's career. What really happened? As memories form and evolve over time, nothing is ever exactly as it appears.